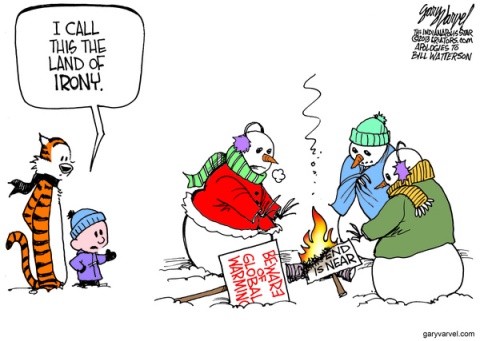 I have been looking at the science behind Anthropogenic (man caused) Global Warming (AGW) since at least 1995.  I have yet to see ANY evidence of imminent catastrophic global warming.

The only ‘evidence’ offered so far by the proponents of this ‘crisis’ is computer models and computer outputs.  As a computer professional, I know that computers are ‘dumb’ machines that only do what they’re told to do, they don’t ‘think’ in any meaningful sense of the word.  Think of an adding machine that can read instructions on a paper tape.  A computer is like that, it can only add two numbers and move numbers around, everything else is programming, including subtraction, multiplication and division.

Measurements have shown NO global warming since 1998.  In fact, the globe has entered a cooling phase, cooling about 1.1 degrees Fahrenheit per decade since 2001.

In Al Gore’s propaganda film “An Inconvenient Truth” he suggests that historically temperature and carbon dioxide (CO2) levels track together.  That part is true, what he fails to mention is that CO2 FOLLOWS temperature, not the other way around.  To believe that a lagging indicator could possibly be a cause defies all logic and common sense.  It’s like saying the thunder causes the lightening.

Here is the relationship between CO2 and the earth’s temperature, when the temperature rises, the CO2 levels rise about 800 years later.  Al Gore’s graph doesn’t show that because he uses a very long time scale, about 600,000 years.  It takes the oceans about 800 years to respond to changes in earth’s temperature.  The oceans are a huge CO2 reservoir.  When the water warms, some of the CO2 comes out of solution, like a glass of cold water on a warm windowsill deposits gas bubbles on the inside of the glass as it warms.  The same thing happens on a much larger scale in the oceans.

The sun has a far greater effect on climate than any trace gas, such as CO2 and methane (CH4).  Current theory postulates that with more sun spots, the stronger solar wind inhibits galactic cosmic rays from impacting the lower atmosphere, resulting in fewer clouds, hence more solar warming.  With the sun in a very quiet period, one would expect to see a cooling climate, which is what we’re seeing.

There’s a paper on this effect by U.S.G.S. scientist Charles A. Perry at:
http://www.greatglobalwarmingswindle.com/pdf/Gamma Rays and Climate – Perry, Charles.pdf

The liberal dominant media have been screaming about imminent climate catastrophes for a long time.  In the 1920s it was a possible ice age.  On September 10th, 1923 Time Magazine reported, “The discoveries of changes in the sun’s heat and the southward advance of glaciers in recent years have given rise to conjectures of the possible advent of a new ice age.”  On September 18, 1924 the New York Times chimed in with “MacMillan Reports Signs of New Ice Age.”

In the 1930s it was global warming.  On March 27th, 1933 the New York Times reported “America in Longest Warm Spell Since 1776; Temperature Line Records a 25-Year Rise.”  Time Magazine followed up on January 2nd, 1939 with “Gaffers who claim that winters were harder when they were boys are quite right… weather men have no doubt that the world at least for the time being is growing warmer.”

In the 1970s it was back to global cooling and another ice age.  On June 24th, 1974 Time Magazine reported that “Climatological Cassandras are becoming increasingly apprehensive, for the weather aberrations they are studying may be the harbinger of another ice age.”  The New York Times followed up on May 21st, 1975 with “Scientists Ponder Why World’s Climate is Changing; A Major Cooling Widely Considered to Be Inevitable.”

On April 9th, 2001, Time Magazine reported that “[S]cientists no longer doubt that global warming is happening, and almost nobody questions the fact that humans are at least partly responsible.”  The New York Times followed up on December 27th, 2005 – “Past Hot Times Hold Few Reasons to Relax About New Warming.”

Can you spell C-Y-C-L-I-C-A-L?  Why are the New York Times, Time Magazine and NASA ‘scientist’ James Hansen given any credibility at all?  Only a fool would believe anything they print or say without fact checking it.

John Coleman is the founder of the Weather Channel and a respected retired weatherman.  He wrote the following column about AGW.

It is the greatest scam in history.  I am amazed, appalled and highly offended by it.  Global Warming; It is a SCAM.
Some dastardly scientists with environmental and political motives manipulated long term scientific data back in the late 1990’s to create an illusion of rapid global warming.  Other scientists of the same environmental wacko type jumped into the circle to support and broaden the “research” to further enhance the totally slanted, bogus global warming claims.  Their friends in government steered huge research grants their way to keep the movement going.  Soon they claimed to be a consensus.

Environmental extremists, notable politicians among them, then teamed up with movie, media and other liberal, environmentalist journalists to create this wild “scientific” scenario of the civilization threatening environmental consequences from Global Warming unless we adhere to their radical agenda.

Now their ridiculous manipulated science has been accepted as fact and become a cornerstone issue for CNN, CBS, NBC, the Democratic Political Party, the Governor of California, school teachers and, in many cases, well informed but very gullible environmentally conscientious citizens.  Only one reporter at ABC has been allowed to counter the Global Warming frenzy with one 15 minutes documentary segment.

However, Global Warming, i.e. Climate Change, is not about environmentalism or politics.  It is not a religion.  It is not something you “believe in.”  It is science; the science of meteorology.  This is my field of life-long expertise.  And I am telling you Global Warming is a nonevent, a manufactured crisis and a total scam.  I say this knowing you probably won’t believe me, a mere TV weatherman, challenging a Nobel Prize, Academy Award and Emmy Award winning former Vice President of United States.  So be it.

I suspect you might like to say to me, “John, look the research that supports the case for global warming was done by research scientists; people with PhD’s in Meteorology.  They are employed by major universities and important research institutions.  Their work has been reviewed by other scientists with PhD’s.  They have to know a lot more about it than you do.  Come on, John, get with it.  The experts say our pollution has created a strong and increasing greenhouse effect and a rapid, out of control global warming is underway that will sky rocket temperatures, destroy agriculture, melt the ice caps, flood the coastlines and end life as we know it.  How can you dissent from this crisis?  You must be a bit nutty.

Allow me, please, to explain how I think this all came about.  Our universities have become somewhat isolated from the rest of us.  There is a culture and attitudes and values and pressures on campus that are very different.  I know this group well.  My father and my older brother were both PhD-University types.  I was raised in the university culture.  Any person who spends a decade at a university obtaining a PhD in Meteorology and become a research scientist, more likely than not, becomes a part of that single minded culture.  They all look askance at the rest of us, certain of their superiority.  They respect government and disrespect business, particularly big business.  They are environmentalists above all else.

So when these researchers did climate change studies in the late 90’s they were eager to produce findings that would be important and be widely noticed and trigger more research funding.  It was easy for them to manipulate the data to come up with the results they wanted to make headlines and at the same time drive their environmental agendas.  Then their like minded PhD colleagues reviewed their work and hastened to endorse it without question.

There were a few who didn’t fit the mold.  They did ask questions and raised objections.  They did research with contradictory results.  The environmental elitists berated them and brushed their studies aside.

I have learned since the ‘Ice Age is coming’ scare in the 1970’s to always be a skeptic about research.  In the case of global warming, I didn’t accept media accounts.  Instead I read dozens of the scientific papers.  I have talked with numerous scientists.  I have studied.  I have thought about it.  I know I am correct when I assure you there is no run away climate change.  The impact of humans on climate is not catastrophic.  Our planet is not in peril.  It is all a scam, the result of bad science.

I am not alone in this assessment.  There are hundreds of other meteorologists, many of them PhD’s, who are as certain as I am that this global warming frenzy is based on bad science and is not valid.

I am incensed by the incredible media glamour, the politically correct silliness and rude dismissal of counter arguments by the high priest of Global Warming.

In time, a decade or two, the outrageous scam will be obvious.  As the temperature rises, polar ice cap melting, coastal flooding and super storm pattern all fail to occur as predicted everyone will come to realize we have been duped.

The sky is not falling.  And, natural cycles and drifts in climate are as much if not more responsible for any climate changes underway.

I strongly believe that the next twenty years are equally as likely to see a cooling trend as they are to see a warming trend.

Update: I recently found a paper that indicts the models used by the Global Warming Alarmists to forecast Catastrophic Anthropogenic Global Warming.  Take a look at it here: Hypersensitive Models

Summary for Policymakers of the Report of the Nongovernmental International Panel on Climate Change
http://heartland.org/policy-documents/nature-not-human-activity-rules-climate-pdf?artId=22835

If you’re a Middle or High School Science teacher, show this DVD next to Al Gore’s propaganda film “An Inconvenient Truth” and challenge your students to think critically.
http://www.greatglobalwarmingswindle.com/