The Liberal Dinosaur Media (LDM) continues to focus on gun control as an answer to the Sandy Hook Elementary School killings.  That was where one nut with a gun, shot and killed 20 children and 6 adults in Newtown, Connecticut.  Connecticut already has some of the most restrictive gun laws in the country, but none of them prevented this killer from stealing his mother’s guns, killing her, then stealing her car, going to the school and killing many more.

Indeed, Connecticut has, at present, an ‘assault weapons ban’ along the lines of the ban enacted by the Clinton Regime in the 1990’s that the LDM wants to resurrect.  That ban was in place for 10 years and did not reduce crime of any sort, at all!  It was completely useless!

At any rate, anyone who believes the LDM without question, is foolish.  But I digress. 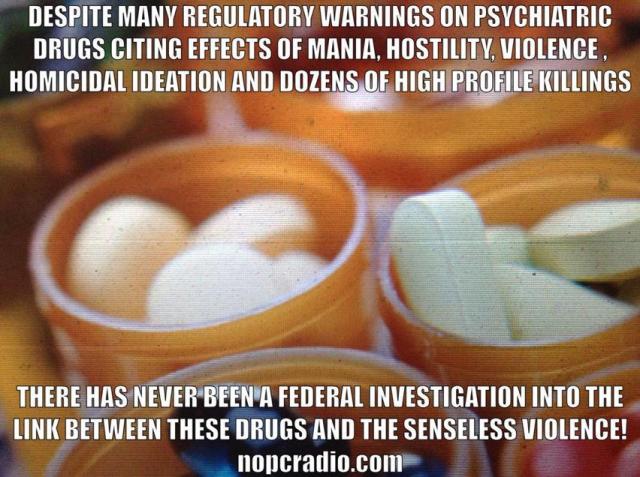 I found several articles that pointed in another direction as the cause of the bloodshed.  This article, http://www.wnd.com/2013/01/the-giant-gaping-hole-in-sandy-hook-reporting/, briefly mentioned some other possibilities, violent video games, the failure of the mental health system, the unintended consequences of making schools “gun-free zones” and wonders why no one in the LDM has investigated the possibility that the prescription drugs the killer was taking may have had a role.

The medications that the article mentions are widely prescribed selective seratonin reuptake inhibitors (SSRIs) like Prozac, Paxil, Zoloft, Effexor, Luvox and many others.  There is an extensive list of crimes committed by takers of these drugs at http://ssristories.com/index.php.

Another story points out that 90% of the school shootings in the last decade have been linked to the use of Psychiatric drugs.  http://www.wnd.com/2012/12/psych-meds-linked-to-90-of-school-shootings/  This claim was made by British psychiatrist Dr. David Healy, a founder of RxISK.org, an independent website for researching and reporting on prescription drugs.  Another source consulted by this article is Dr. Peter R. Breggin, a Harvard-trained psychiatrist and former full-time consultant at the National Institute of Mental Health.

Yet another article, from 2001, laments the tendency of parents with difficult children to put them on prescription drugs as a way to control them better.   http://www.wnd.com/2001/06/9827/.  This article also suggests some other possible solutions toward the bottom of the article.

For a scientific/medical/psychiatric discussion of the connection, here is a paper from 2006 about the problem: http://www.plosmedicine.org/article/info:doi/10.1371/journal.pmed.0030372#close

Another article entitled “Neighbor says Lanza was on meds, links between SSRIs and violence” is at: http://digitaljournal.com/article/339440.

Another article entitled “SSRIs associated with severe violence in a small number of individuals” is available at: http://www.health.am/psy/more/ssris-associated-with-severe-violence/ makes the point that ‘severe violence’ is a rare occurrence, but with so many people on these drugs, ‘severe violence’ incidents are bound to occur every so often.

Shortly after the Sandy Hook murders Wayne LaPierre, Executive Vice President of the National Rifle Association, said “The only thing that stops a bad guy with a gun is a good guy with a gun.”  Who can disagree with that?